…and some things that just rub me the wrong way.

I’ve already written quite a bit on the things that I do like (here, here and here), so I’d like to finally write about my dislikes.
These are not in any particular order and are not meant to offend or anything.  These are just my personal observations from the 2.5+ years that I’ve spent living, working and traveling in Korea.

1. Spitting
This is extremely common and done by men/boys in their teens all the way up through to old age.  You can be walking down the street and you’l hear a “hhahwwwkwkkkkkkkkkkkk puuuutuh.”  (The sound of hawking a loogy in case you didn’t know.)
I’ve been directly behind them and had to sidestep out of the way to avoid it.  So nasty.  I dunno, drink more water or something.

2. Poor driving (cars parking on sidewalks, motorbikes, red lights)
I’m so, so, so glad that I don’t drive here.  Red lights seem to be more of a suggestion as people will just honk their way through as they run the light.  Maybe this is a city thing?, but I’ve never seen anything like it in other cities that I’ve been to…but parking on sidewalks and just…anywhere seems to be an ok thing.

Delivery motorbikes zip in and out of traffic and drive on the bike paths on the sidewalks.  It’s a bit of a mess really.
Oh, and this is a common sight. 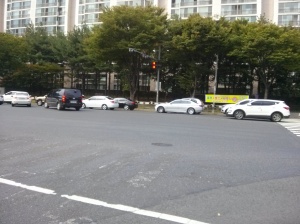 Blocking the flow of traffic

I asked my friend and she said it was illegal but that people do it anyway because they don’t want to wait.  Which…you have to wait anyway because the cars in front aren’t moving and you block the flow of traffic for all of the other cars…but hey!  Why not?
That same friend had also said that she had been to the US and really liked how we seemed to have a system for 4-way stops (yes.)  In case you’re unaware, or not from the US, we operate under the “first-come, first-to-go” sort of policy.  If you’re there first, you stop, look and go.  Then the next person to arrive goes…and so it continues.
That doesn’t exist here.  If you wait your turn, you’ll never have one.

3. Lack of common sense (due to the need to follow directions all the time)

4. All work and no play makes Lee a dull boy.
The work-culture here is a bit insane.  People work incredibly long hours and sacrifice family time (if there is any) to advance at work.  Also, people will often come into work early and leave later because the amount of *time* spent at your job shows your dedication and commitment.  You might not be super productive during those hours, but if you’re there early and leave late, then you look better than those who are not.

This also affects the students because students are often at school from early in the morning til late at night.  Wealthier families try to send their kids to the after-school schools/cram schools/academies to get them ahead or extra tutoring.  Rather than have time playing games (OUTSIDE GAMES, not computer or phone games *headdesk*) or going to the park, they’re in school or at tae kwon do or at piano/flute/guitar/banjo/ballet/swimming/hapkido practice.

For example, I have one student in my 6-8 PM class that is always wearing his hapkido uniform because he has hapkido directly after our class.  It’s often school, then home for a snack and to change clothes, finish up some homework/play computer games (I’ve asked) and then off to hagwons (after school academies).

This leaves little time for kids to be kids or for any sort of self-exploration or discovery.  The schools don’t seem to have the same sort of club structure that we had in our schools (and yes, to each their own, but I think those school-sponsored clubs were a great way to discover your interests).

Anyway, I know this society is based on Confucianism and doesn’t really value individualism or developing your own hobbies and interests.  As a child, you’re basically told to do whatever your parents want you to do and that’s that.  It creates good rule-followers but does little to develop the self or any sort of creative instincts, which is very noticeable as a teacher.

5. Pushing/Shoving/Lack of Personal Space
Lines?  What lines?  Getting on the subway or train can be frustrating because everyone seems to be in a big hurry, which is part of the “bali bali” (“quick quick”/”hurry hurry”) culture.
It’s possible also that it stems from having so many people in such a small space.  However, when I visited Japan, people were still quite capable of making lines and not shoving eachother around.

I’ve also included this in a few of my classroom lessons.  Not sure if it’ll make a difference, but if I can stop it in my own classroom, then that will be enough for me and hopefully they can take those lessons outside of the classroom.
Unless someone is handing out free money or the train is leaving the platform in one minute, there isn’t a reason to shove other people.  So just calm down everyone.

I have students that push eachother to get to a chair when I open the door of my classroom and it’s like “Whoa there!  There are plenty of chairs for everyone.”  Maybe they’re all just super excited to be in my class.  😀  haha  Or trying to get that perfect chair in the room…I’m going to go with the former.

Here’s a great article on some of the pressures in Korean society.

6. Dirty Streets/Litter/Lack of Public Trashcans
Korea doesn’t have many public trashcans and it shows.  This is one of my top dislikes about Korea.  It makes it smell and it looks awful.  No, not awful…disgusting.

These were a few taken near my apartment, but it’s like this in a lot of places. 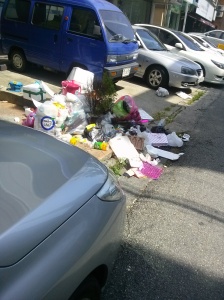 Also, fliers are used as advertising and chucked all over the streets (and sometimes posters are taped to the ground) and it’s never really cleaned up.  A bunch of ajummas (older ladies) come by in the early mornings and pick things up, but the bright green tape is always there on the ground and the cigarette butts look like confetti on the sidewalks and streets.

//Taking a breather here because I just viewed it and this post looks a bit overwhelming and long.
Tune in next time for part 2.  It’s already outlined, I just need to add in some details.  😀
Hope you’re having a lovely week!